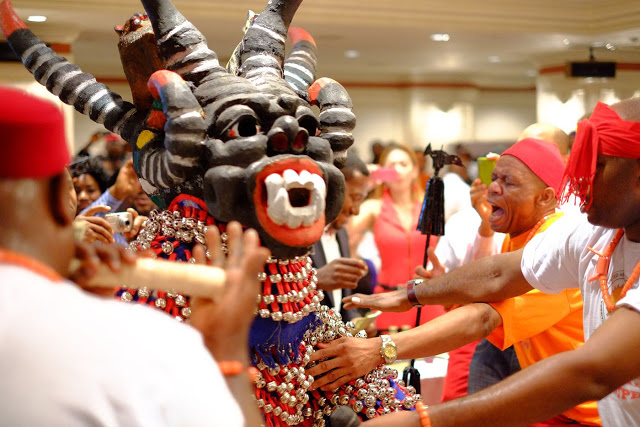 Igboland’s traditional religion is based on the belief that there is one creator, God, also called Chineke or Chukwu. The creator can be approached through numerous other deities and spirits in the form of natural objects, most commonly through the god of thunder (Amadioha).

There is also the belief that ancestors protect their living descendants and are responsible for rain, harvest, health and children. Shrines, called Mbari, are made in honour of the earth spirit and contain tableaux of painted earth. Other shrines keep wooden figures representing ancestors and patrons. The evidence of these shrines, oracle houses and traditional priest in the villages still emphasize people’s beliefs, though with the western influence, Christianity has taken a more dominant role in modern Igboland.

Nowadays, Religion occupies a central place in the heart of Nnewi people. This counts for the huge churches and religious practices in the city.The people of Nnewi are 96% Christian, with small fractions of other faiths: 2% traditionalist, 0.2% Jews, 0.3% Muslims and 1.5% others. Among the Christian community, the catholic and Anglican Communion shares a greater number of followers followed by other Pentecostal Christian groups.

Christianity fist came on the Southeastern part of Nigeria with the arrival of the Holy Ghost missionaries from Gabon to Onitsha under the leadership of Fr. Joseph Lutz late on Saturday December 5, 1885. Fr. Joseph Shanahan (The Apostle of Igboland) joined them in 1902 and when the mantle of leadership fell on him in 1905, history was set to record the evangelization of [Roman Catholic Diocese of Nnewi Nnewi Diocese]. The stream of this evangelization was to flow through two main courses almost concurrently: one having Nnewi as its source and the other Ozubulu/Ihiala.

Though individuals from various communities have come in contact with the faith as they traveled to Onitsha and other places for trade and in quest of western education, the actual planting of the seed of the gospel in Nnewi Diocese from the Catholic perspective sprang from the treks of Fr. Victor Duhaze to Ozubulu through Oguta (1906) and to Nnewi through Umuoji, Ojoto Mili Agu down to Odida Nnewichi in 1906.

However, the Anglican Church was established in Nnewi from Obosi in 1893. But the seed of what is today Nnewi Diocese was sown in 1809. Requests were made by Odida. Community in Nnewichi inviting Fr. J. Shanahan. In the same year, some Ozubulu indigenes had registered the same requests for establishing a Church station at Ozubulu.

One of the most important events in Igboland is Christmas and it signifies home return in the village. Even though they live most of the time in the city or somewhere else in Nigeria, Nnewi families consider their one and only real home their house in the village. It is the two weeks around Christmas which bring families back together to the village. It is the time to catch up with other family members on what has happened over the year and visit relatives and friends in the neighbourhood. You will find the cities empty during this period only preceded and followed by the traffic peaks caused by travelling back and forth between the village and the cities.

Easter is the other event, though smaller in scale, which provides Igboland a break for festivities. People tend to go to their villages but most of them stay around in the city to visit friends and relatives.

In line of this, Mother’s day is the last one I want to mention. On this Sunday the mothers prepare special food for the whole family, which is obviously a feast on its own.