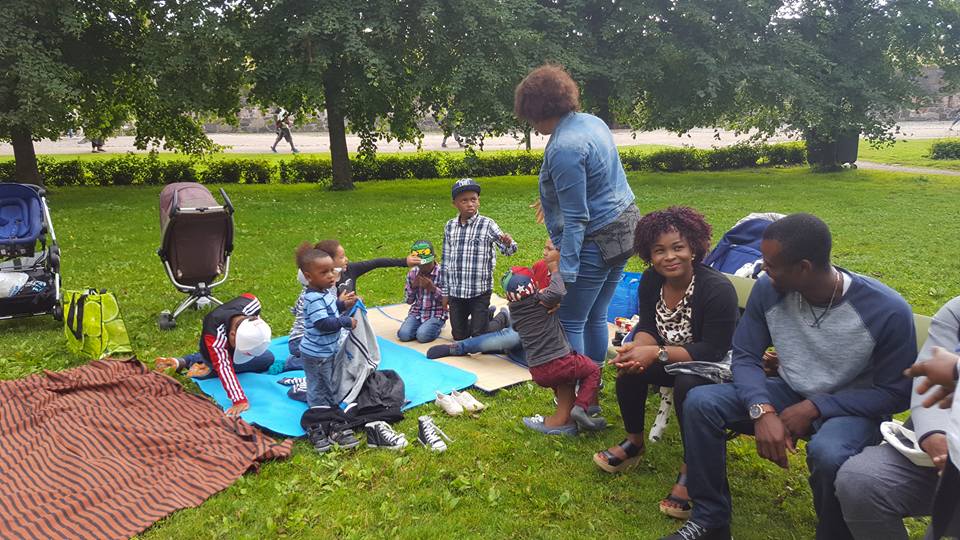 Folklore plays a major role in Igbo culture.  They represent creation, life, and even death.  Through elaborate tales, the Igbo people pass on their beliefs about how their people came to be.  While the tales focus mainly on animal characters, they represents many aspects of everyday life.  Igbo folk-tales, like American fables, are useful teaching tools for the young.  The stories are spread through youth, encouraging positive behaviour.

Before missionaries arrived, Igbo folk-tales were the primary source for learning everyday life lessons.  Certain tales such as “How the Tortoise Got Its Bumpy Shell” warn children against greed and untruth and instead encourage honestly, and the mutual support of those around an individual.  This is important in Igbo society because they are a people who are very much reliant on their neighbours.  They borrow seeds in the planting season, and assist each other in building up compounds.  Connectedness is considered essential for the Igbo people, and many decisions are made by a large part of the clan, instead of an individual.
While Igbo folktales teach many important lessons to the people, they are also a sort of religion for the masses.  The folktales tell of how things came to be in the natural world.  From the creation of the earth to the reason a mosquito buzzes in a person’s ear, almost anything can be explained by an Igbo folktale.  They are to the Igbo people are, what the Bible is to a Christian.  The tales are not only a rich way of preserving beliefs, they are the values of the people.  They teach Igbo people how to become a better person in societyThe Igbo have a system of folk beliefs that explains how everything in the world came into being. It explains what functions the heavenly and earthly bodies have and offers guidance on how to behave toward gods, spirits, and one’s ancestors.

The Igbo believe the world is peopled by invisible and visible forces: by the living, the dead, and those yet to be born.Reincarnationis seen as a bridge between the living and the dead.

Throughout Chinua Achebe’s Things Fall Apart, many lessons are taught and many stories told.  Over the course of the novel, Achebe inserts smaller stories which are the folktales of Igbo society.  The folktales connect to their place in the novel, and give the reader a sense of what Igbo values are.  Achebe includes five folktales throughout the course of the story.  They are:The Vulture and the Sky, Mosquito and the Ear, Leaves and the Snake-Lizard, How Tortoise Got His Bumpy Shell, and Mother Kite and Daughter Kite.  Each story has its own meaning, and its own reason for being in the story.  The stories are powerful, and Achebe uses their power to captivate the reader.

Though, it is important to note that none of the stories appear after the missionaries arrive.  If the folktales represent the perseverance of Igbo culture, the missionaries are the force that drives it back.  Just as the people stop practicing their original Igbo religion and switch to christianity, the folktales also stop.  Achebe portrays this amazingly.  It represents a cultural shift of the Igbo people.  Okonknwo does not participate, but it is clear in the novel that the tide is slowly changing.
The folktales that are told in Things Fall Apartusually come from an older person to their children.  Ekwefi tells the story Enzinma.  Folktales, like Igbo proverbs, enhance the language that is so greatly respected.  If one can tell a good story, they are regarded as wise, and a good orator.
Achebe also uses folktales to help get the story across.  They represent larger, real life stories, but are hidden in the folklore of Igbo people.  The folktales often times represent the invasion of colonizers into the Igbo society. Colonizers are portrayed as greedy, and abusive of their power.  One of the strongest examples of this representation, is the folktale “How Tortoise Got His Bumpy Shell.”  In the tale the colonizers are the Tortoise and the Igbo people are the welcoming Birds.

The eastern part of Nigeria largely occupied by the Ibo tribe, is rich in culture, customs and traditions and one of the tenets that has survived the rage of civilization and modernization is the art of storytelling.  Interesting and educative folktales which have been passed down from generations to generations from the ‘ancestors’  are told to children in the bid to preserve the norms and culture of the tribe, imbibe good morals and instill the spirit of communal love amongst members of their society. These Igbo folktales which paints colourful pictures of spiritual life and traditional aspirations are regarded as fictitious, incredible, mythical and totally removed from real life situations. However, with regards to their functionality, these folktales exhibit elements of truth that translate into realism. Jovago.com, Africa’s No.1 online hotel booking site offers 4 common traditional folktales you should seek to hear while visiting eastern Nigeria.

Usually accompanied with a song, this folktale tells of a young pretty girl who meets a great misfortune due to her defiance and decision to disobey her parents. Set in a time when demons and spirits roamed around villages, the girl called “obaledo” was instructed by her parent before embarking on their trip, to remain within the confines of their home and  eat just yam and snail when hungry. The parents asked that she roast the yam first before the snail, as the snail would eventually quench the fire. Unfortunately, the girl, being greedy and having a strong lust for meat, roasted the snail first and fire went off. Still hungry, she set out of her home, in disobedience to her parents, to get a matchstick from neighbors. On her way, she encounters a demon that steals her beauty and leaves her with his own ugliness.

This story tells about a greedy tortoise who ends up trapping himself in his own greed. The tortoise, envious of a rich king who had a drum that would produce food and great wealth each time it was beaten, set a trap for the king’s wife, and when she fell for it, he demanded the drum as his only compensation. Unknown to him however, the drum only produced the luxury he has seen on certain conditions and was bound by a juju.  Eventually, the tortoise and his children break the juju that was bound to the drum and instead of food and riches, each time he beat the drum, some men will emerge and whip him thoroughly. Defeated, the tortoise and his family  made their home underneath the prickly tree, and according to the tale, that is the reason tortoises are always found living under the prickly tie-tie palm, as they have nowhere else to go to for food.

The disobedient daughter who married a skull

This tale narrates the story of a maiden who was so pretty she had suitor from around the world. Unfortunately, she was very picky and was never satisfied with any of the offers. A demon from the spirit world in the form of a skull , fell in love with her and was determined to marry her. He went round villages collecting body parts and became extraordinary handsome. As expected, the maiden fell in love with him once she set her eyes on him and agreed to marry him. After the marriage, the demon took the maiden to the spirit world where she suffered. She was however very nice and helpful to the demon’s mother and in appreciation of her acts of kindness, the demon’s mother helped her escape and sent her back to her parents. On getting to her parents’ home, the father asked her to marry a friend of his, and she willingly consented, and lived with him for many years, and had many children.

Why a Hawk kills Chickens

More of a fable than a story, this tale tries to justify or give reason to why the hawk always attacks the chicken or steals the hen’s chicks. The story tells of a love story between the hawk and a pretty hen which was aborted by a desperate cock who was in love with the hen. After the hawk had paid the bride price of the hen, married her and taken her to the land of the Hawks, a desperate cock who encountered her fell in love with her and crowed beautifully when he accosted her. Unable to resist the sweet sound of the crow, she absconds her husband’s house and returns to the land of fowls with the cock. Angry and feeling cheated, the hawk demanded for a return of his dowry as it was the custom, but since the hen’s parents nor the cock could pay him back, they took the case to the king of animals who then decreed that the hawk could kill and eat any of the cock’s children whenever and wherever he found them as payment of his dowry, and, if the cock made any complaint, the king would not listen to him. And so from that time until now, whenever, a hawk sees a chicken he swoops down and carries it off in part-payment of his dowry.