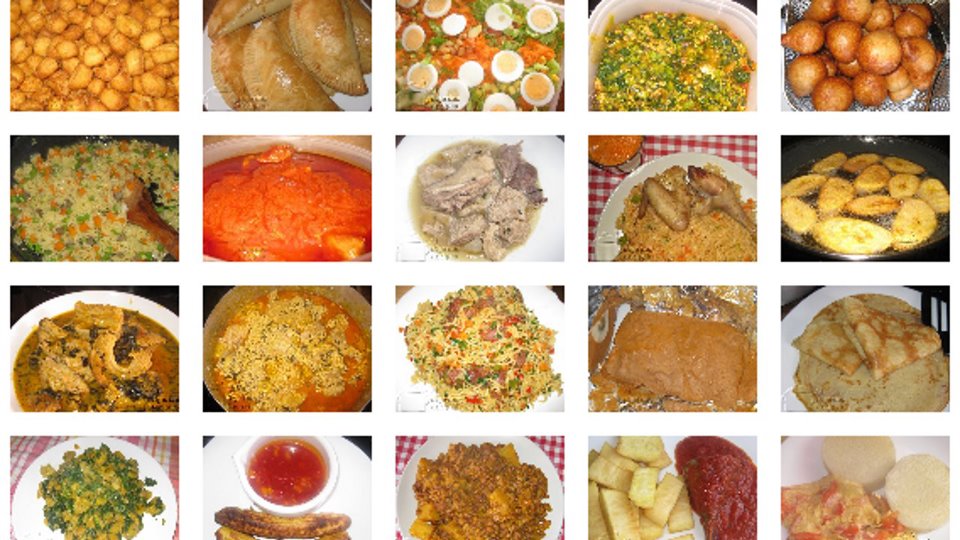 In Igbo culture, Food is one of the first things presented in a formal greeting between friends, visitors, and family. Offering drinks, food, and meat are not regarded nearly as important as the offering of the kola-nut. It is a sign of disrespect for a guest to refuse food- otherwise the impression is that they have not had food in a long time. However, they are not expected to finish all the food and leave morsels of it behind. The Eldest man eats first when food is shared at a home or workplace. The youngest man usually serves the wine to the eldest, or most titled man. After formalities are finished, the remaining men are equals in being served.

Yams tend to be the main source of food, stable enough to support the entire region on this single crop; the yam could be cut, boiled, smoked, barbequed, fried, or grilled. With the economy depending on yam production, this tradition is considered mandatory for good yam production. The first yam is always eaten by the eldest tribe member. In the Igbo culture, soups and meats are a very good nutritional meal. They are usually served with a side of yams are pounded or joloff rice. They are made with palm oils. The key component to soups and stews are chicken, cow, goat, turkey, dry fish, or stock fish.

Jollof rice and fried rice are among the most widely eaten Nigerian foods. They are accepted by almost every Nigerian both at home and in the Diaspora. The process of making these recipes is a bit complicated but gets easier with practice. After the British colonization, Nigerians were open to trying new Western Foods and, in the process, local rice was replaced with par-boiled rice.

Here we have typically listed a number of soups with meat or fish ingredients, served with either pounded yam, eba (steamed garri), semovita or jollof rice. Pounding yam is an effort on its own, and after observing its pounding, you probably value your food a lot more.

The soups are mostly palm oil based and the most popular ones in Igboland are:

Meat or fish is a key component of the soup, mostly originating from cow, chicken, goat, turkey, dry fish or stockfish. Stockfish is air-dried codfish that is soaked and cooked in the soup. Some restaurants advertise bush meat as well, which can be from antelopes, but more valued is the grass-cutter (also called bush or cane rat), or maybe even less familiar species. Bush rat meat is worth a try, when cooked properly, as it is very tender and well spiced. Vegetarians, unfortunately, may find themselves limited to only a few non-meat dishes on the menu list.

The less hungry people may try moi-moi or suya. Moin-moin is a delicious steamed bean cake; suya is a brochette with thin slices of grilled cow or goat meat. To make this section complete, you can find the recipes for egusi and okro soup:

Cut the meat into bite-sized chunks and add 1 cup of water, ½ teaspoon of salt and half cup of onions to it and cook it for about 10 minutes. Meanwhile, fry the finely chopped onions, tomato paste and peppers for 5 minutes in palm oil. Grid or crush the egusi seeds and mix it with enough water to make a paste and add to above together with the shrimp or crayfish. When the meat gets brownish, add it to the above sauce to cook until tender. Add the bunches of bitterleaf (finely chopped) 10 minutes before the end of cooking time.

Trim, wash and cut meat or fish into small pieces and boil until cooked. Pound together the onion, peppers and crayfish, add it to the meat and let it simmer for 3 minutes. Add the okro, stock, salt, palm oil to the soup and cook for a further 3 minutes. Note that for vegetable soup, you can use greenleaf instead of okro.
Both soups are to be most typically served with pounded yam or garri.

There are many local chop houses and street food around in Enugu. There is also a considerate number of western (O’Neill’s and Hobby’s) and Chinese restaurants (Raya and Genesis) in the town, as well as fast-food places (Bubbles and Mr. Biggs) with pizza’s, hamburgers and fries served. Nightclubs, such as Frenzi (in a beautiful colonial style building), Spring Fellows and Vincent Gardens, do only serve light snacks.